A classic example of business self-sabotage 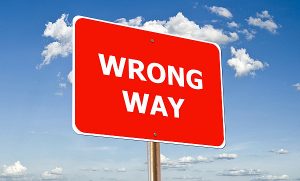 We hear a lot of stories about business self-sabotage in the work that we do but this example is an absolute classic.

In this short session, I want to tell you a story, a real classic example of business self-sabotage in the hope that you won’t repeat such crazy things to the detriment of the profitability of your business.

It goes something like this. Last week I was in discussion with a client of mine who runs a very clever software system that emails out marketing emails to the customers of e-commerce websites based upon their buying preferences. It’s very clever, and his clients get some great results, far above what they spend.  The return on investment for many clients is just huge.

But he had one such client where this software service was costing him just £100 a month — not a massive spend in terms of marketing budgets.  But it had actually brought, in the short time that this client had the service, £14,000 worth of new business. I’m not just talking about continuation — but brand new business.  That increased his turnover by £14,000 for just £100 worth of spend.

But this client decided to cancel the service because he had three complaints from clients about the emails.

Now, let’s stop and think about that. For £100 spent, he gets £14,000 worth of new business, and cancels the service because of just three complaints about the emails.

Now, I have to admit, when I heard about this, I was just absolutely staggered that this business owner could be so shortsighted in terms of the wider picture of the long-term profitability of his business.  If I spent £100 on a marketing project, and it brought in £14,000 worth of new business with just a few complaints, you know what? I think I’d probably handle the complaints, maybe offer a gift for the people who had complained, take them off the emailing list, for sure, but I certainly wouldn’t ditch the service that had brought in all this money. To me, that would be,just plain business self-sabotage.

But, unfortunately, this kind of shortsighted, reactionary approach is far too common in business, especially small businesses, where you think a complaint is such a big deal.  Well, I got news for you. If you’ve been in business long enough, someone is going to complain.  It’s impossible to keep everybody happy all the time, and with some clients, it’s impossible to keep them happy at any time.

Three complaints versus £14,000 worth of new business. Which would you rather choose?

So people are likely to grumble, but that doesn’t mean that you should throw away profitability for the sake of being able to handle a few complaints.  I mean, think about it.  Three complaints versus £14,000 worth of new business. Which would you rather choose? I know where I sit.

But the point I’m trying to make is this: This kind of business self-sabotage is very common.  I just really find it hard to believe that business owners would be so shortsighted.

My view is, if you’re that concerned about just three clients complaining when put against the prospect of bringing in thousands of pounds’ worth of new business, to me your problems in business go much deeper than handling those complaints.  You have a fundamental flaw in the way you think about your business because, ultimately, someone’s going to complain.  What are you going to do? Stop working?  What are you going to do? Close down the shop because you can’t handle the complaints? Seriously?

But my message to you is this: Don’t be so daft as to think that, even if your marketing cheeses one or two people off, that you should stop doing it. If it proves profitable.  You handle the complaint and you handle the situation in a mature and grownup fashion. But, seriously, don’t shoot the golden goose because it’s a little bit noisy.  It’s just absolutely crazy.  Avoid business self-sabotage at all costs, because it’ll cost you a lot if you don’t.

So I hope that has resonated in some way, shape, or form. Have a look at what you’re doing. Have a look at where the areas in your business are that maybe you are shooting yourself in the foot. Maybe you are guilty of a little bit of self-sabotage. We’ve all done it. I’ve done it, and I know loads of other people have too. The key is to recognise when this is happening in your business so you can put it right to the benefit and not to the detriment of your long-term profitability and sustainability.