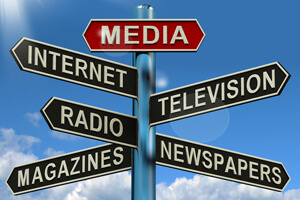 First there were flyers, then came newspapers, followed by radio and then television. All four of them were broadcast media, usually selling broadcast/scattergun marketing channels.

Broadcast / Scattergun marketing isn’t the only way any more…

The thing is, as many will already know, they are slowly dying. Ad revenue in the press has been falling for years, many TV stations are struggling, and radio stations have been merging in an effort to cut costs. Cable and satellite broadcast systems haven’t helped because they now offer hundreds of channels and this has diluted ad revenues due to shrinking per-channel audiences. The subscription model has been their particular route to profit.

There’s a variety of reasons why all of this is happening but the internet has had the biggest impact in recent years.  With tools like Google Adwords advertisers can direct their ads specifically at those looking for their products or services.

You see, before the internet almost all of the advertising power resided with the broadcast media companies. But because of the costs involved, widespread advertising was beyond the reach of most smaller businesses.

But the big problem with broadcast or scattergun marketing is that it was all very hit and miss. You couldn’t really do much in the way of targeting your intended market.

The best you could do was to put ads in magazines applicable to your industry but, again, that was often prohibitive to micro-businesses and startups due to cost. The magazine publishers knew they had you over a barrel (with a captive market) and made you pay.

Even the once-mighty Yellow Pages is pretty much dead.

But here’s the difference today (and surprisingly large numbers of small businesses still really miss this): internet marketing enables you to affordably target your market like never before. It really has become a marketeers dream come true.

And here’s what I mean by this: With tools like Search Engine Optimisation, Google Adwords and Facebook Ads you can select your approach and narrow down your messages to only those people who are looking for what you’re selling or only those in your target (segmented) market.

But let me illustrate this with a short story from my past.

When I left school I went to work for my father who ran a small business selling office furniture. He was totally sold on the idea of advertising in the local newspaper and would spend regularly on ads in the business pages.

It was scattergun marketing at its worst. He was hoping that someone in his market happened to see his ads and happened to be looking for new office furniture at that time.

Well as you can imagine, the phone didn’t ring and nobody came rushing in through the door anxiously wanting to buy a desk, chair and filing cabinet. I don’t remember it happening a single time as a result of the money we spent on the ads.

Now, I’m not saying that scattergun marketing in the press and broadcast media doesn’t work at all. For some businesses it works very well. But these businesses go to great lengths to make sure that their ads are finely crafted to gain a specific response and they’ve done the research to ensure that they know what response the ads get and how much money that brings in. There really is a fine art to getting the best out of advertising.

As an example there is a small law firm here in Leicester who have done very well specifically out of radio advertising. They worked on their ads and then carefully monitored the response rates and subsequent return on investment to ensure that the ads more than paid for themselves. But these guys are in a very small minority.

Having said that, the prices of mass media marketing channels have plummeted and with some insistent negotiation you could probably get a good deal on the scattergun approach. But I would stress that you need to work very hard on your ads and monitor the results closely. Start small and if that proves profitable then scale up slowly.

But the great news is that smaller businesses no longer have to consider spending huge amounts of money on scattergun marketing or broadcast media to reach an intended audience. With more targeted channels you can do very well indeed.

In the coming few posts we’ll be going into more detail on how you can take advantage of some of the targeted marketing channels available to you.

In the meantime, if you have a success (or failure) story then please let us know in the comments section below. It would be great to hear from you.

Or if you’d like to talk with us about how we can help you get to grips with targeted marketing in your business, give us a call on 0116 3552194